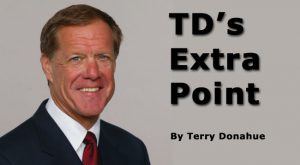 pened Pac-12 play Saturday night with a resounding win in Tucson by running around, over and through the Arizona Wildcats. Some observations: Oregon’s offense is a combination of the wishbone, the single wing and the shotgun. All. Mixed. Together. THREE of the best offenses in the history of the college game at once. Throw a little motion in there and some formations to cause adjustments and all heck breaks loose. If you only have one week to prepare for the Ducks’ offense, you are in serious trouble. They virtually cannot be stopped! Maybe slowed down, maybe contained some, but not stopped. Their pace of play, play design and all-out approach to offensive football has “revolutionized the game,” as so many have said before me. I have seen a lot of offensive football over the years, but none so creative or dangerous to a defense as Oregon.

All that said, if a team has two weeks or more to prepare for Oregon, watch out Ducks. You’ll be served for dinner. Just look at the results against Ohio State, Auburn and LSU. The key to good defense, among other things, is recognition and reaction. With two weeks or more of preparation the defense becomes “comfortable” with what the offense throws at them. But with just a week of prep against this type of offense, the defense is at a huge disadvantage because it’s very hard for defenders to find the ball. And if you can’t find the ball, you don’t team tackle because you can’t pursue, as it’s hard to pursue if you don’t know where the ball is. It’s hard enough to figure out on paper – imagine being a linebacker and having to decide which way to run at the snap!

By the time a defense figures out what’s going on, it’s too late. Oregon gained over 500 yards Saturday night – including 415 rushing yards – and only ran 6 plays in the entire 3rd quarter. What would have happened if they had a normal 3rd quarter? I’m sure glad that when I was coaching in the Pac-10 nobody had yet designed this kind of offense. Of course, that is, unless it was me!

Last note: Flew down to the game on a JETSUITE Phenom 100. What a treat!! Go to their Facebook page and check it out. Really something!!

Terry and John Tautges will be jetting to Boise this weekend, for Boise State-Nevada on the blue turf. Coverage begins Saturday at 2 PM Eastern on Westwood One.