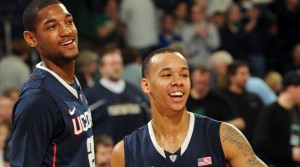 SOUTH BEND, IN – Connecticut dominated Notre Dame in the second half – outscoring the Irish 43-28 – to win in South Bend and snap Notre Dame’s home winning streak at 29 games.

Shabazz Napier led the Huskies (14-3) in scoring with 16 points – one of four Connecticut players to reach double figures.