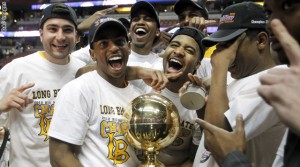 The 49ers had lost in the Big West final the past two years to UC-Santa Barbara, but managed to overcome the Gauchos this year by a final score of 77-64 thanks to stellar play from Ware and freshman James Ennis, who scored 15.

John Sadak and Michael Cage called the action on the Westwood One Radio Network.

(Ware hits again while being fouled)