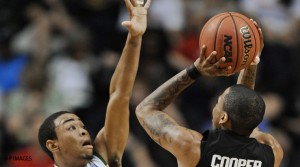 NASHVILLE, TN – A 13-seed is headed to the Sweet 16 for the first time since 2006, but that drought pales in comparison to the one endured by the school which just accomplished the feat.

Ohio University, Mid-American Conference Tournament champions, are journeying where no Bobcat team has since 1964, after a 62-56 victory over South Florida.  The Bobcats will now face North Carolina with a trip to the Elite Eight on the line, but a Tar Heel team which will be without the services of starting point guard Kendall Marshall, who suffered a broken wrist on his non-shooting hand in UNC’s win over Creighton.

The Bobcats were paced by Walter Offutt and D.J. Cooper, who combined for 40 points.  Victor Rudd, Jr. recorded a double-double for the Bulls with 13 points and 10 rebounds, but it will be a bittersweet 21st birthday for the South Florida star.

Brad Sham and Pete Gillen called the action on the Westwood One Radio Network.

(Ohio’s Cooper drills a three…then has some choice words for Collins!)

(Offutt with a 5-point possession for the Bobcats…yes, five points)

(It’s an historic victory for Ohio, and the Mid-American Conference is beaming)