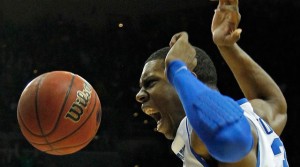 LOUISVILLE, KY – Kentucky showed why they are a number-one seed tonight as freshman Marquis Teague scored a career-high 24 points to lead Kentucky to an 87-71 win over Iowa State.

Royce White had a big game for Iowa State, scoring 23 points with nine rebounds before fouling out with 4:32 left in the game.

The Wildcats will play Indiana on Friday in Atlanta.

Ted Robinson and Kyle Macy called the action on the Westwood One Radio Network.