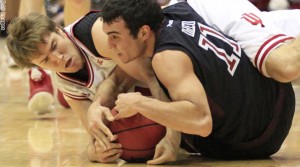 DAYTON, OH – Top-seeded Indiana kept their title dreams alive by overcoming Khalif Wyatt and a tough Temple Owls team 58-52 Sunday afternoon. It took a Victor Oladipo knockout punch with a three-pointer for Indiana with 13 seconds left to give the Hoosiers a four-point lead and put them in the Sweet 16 against Syracuse next Thursday in Washington, D.C.

Alongside Oladipo’s 16 points and eight rebounds, Cody Zeller scored 15 to keep Indiana from being the second #1 seed to fall in this year’s tournament. Temple’s Wyatt had 31 points on the day, but with little contribution from the rest of his team, it wasn’t enough to push the Owls into the fourth round.

Gary Cohen and Pete Gillen called the action on Westwood One Sports.

(Final call as Indiana advances to the Sweet 16)