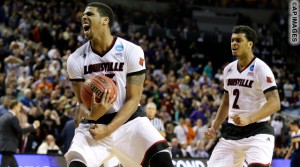 SEATTLE, WA – Continuing Friday’s trend, the 4th-seeded Louisville Cardinals took everything it could handle from UC-Irvine before hanging on to avoid an upset with a narrow 57-55 victory over the 13th-seeded Anteaters.

With the game tied at 55, UC-Irvine forward, Will Davis II, committed an ill-advised foul 93 feet from the Cardinals’ basket with 9 seconds left after a Luke Nelson missed jumper.  Quentin Snider proceeded to drain both free throws to put the Cardinals on top, and then Rick Pitino’s squad benefited from a controversial non-call when Terry Rozier stole the ball from Alex Young in the closing seconds to seal the victory.

Wayne Blackshear carried the Cardinals with nineteen points and seven rebounds, and Snider added sixteen points of his own.

Kevin Calabro and P.J. Carlesimo called the action on Westwood One Sports.