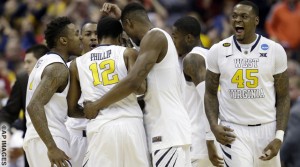 COLUMBUS, OH – Buffalo’s NCAA Tournament debut fell short of an upset, as the more experienced West Virginia Mountaineers held off the Bulls to advance with a 68-62 victory. The Mountaineers will face the winner of Maryland-Valparaiso on Sunday for a chance at the Sweet 16.

Devin Williams led all scorers with 17 for West Virginia, while Xavier Ford did his best to keep the Bulls in it with 16 points of his own. West Virginia held a ten-point lead at the half, but needed a three from Tarik Phillip to seal the win in the final minute.