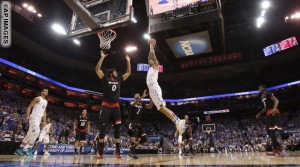 LOUISVILLE, KY – It was a physical battle from the get-go, and at times, it looked like the contest might become more than just “chippy,” but the top-seeded Kentucky Wildcats managed to shake off a rough shooting day by pulling away late for a hard-won 64-51 victory over 8th-seeded Cincinnati.

Both teams shot under 40% from the field, as points from the perimeter and in the paint were hard to come by.  Even though the Bearcats managed to out-rebound John Calipari’s squad 45-38–including 22 on the offensive end–they missed a lot of second-chance opportunities and struggled to keep up with the Wildcats in the second half.

John Sadak and Bill Frieder called the action on Westwood One Sports.