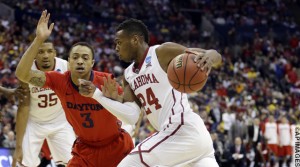 COLUMBUS, OH – Dayton rode a home crowd atmosphere to a second half lead but was unable to close out the game as Oklahoma ran off an 11-0 run in the closing minutes to claim their spot in the Sweet 16 with a 72-66 victory. They’ll face Michigan State next Friday in Syracuse, New York.

Scoochie Smith had 16 points for Dayton in the loss, and Darrell Davis went 5 for 7 on three-point shots to keep Dayton in the game for a while.

Jordan Woodard paced Oklahoma with 16 points as well, with Ryan Spangler corralling twelve rebounds on his own for Oklahoma.