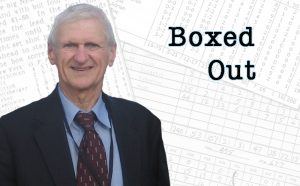 Well, here we are; midway through Championship Week, and some teams are really hot headed into their conference tournaments. I am looking forward to being at the Conference USA Championship and then heading to New York for Selection Sunday duties to talk about everyone from Austin Peay to the ‘Zags. As we try to label teams as sleepers and teams to keep an eye on, it is amazing that the usual suspects are right there at the top. They are hot and they are hungry.

Kansas is on a roll with another Big 12 regular season title. The Jayhawks haven’t lost since January and have won 10 in a row, including wins at Baylor and Texas. I love the fact leading scorer Perry Ellis is a senior as he has played in so many big games. Kansas shoots 70 percent from the foul line, and one thing to remember about this team; they don’t rely on freshmen. That will come in handy at some point when a young team puts pressure on them and they don’t flinch.

The more things change, the more things stay the same. Michigan State didn’t win the Big Ten title, but the Spartans are primed for a big run. When Denzel Valentine missed four games and then the Spartans lost three games in seven days a few weeks later, a lot of doubt started getting thrown around by the national media. Silly them. Did everyone forget who was coaching this team? MSU has won its past six and that includes wins against Indiana, Wisconsin and Ohio State twice. The Spartans have lost just once since January 21st, and that was an overtime game at Purdue. Its top three scorers are seniors (Denzel Valentine, Bryn Forbes and Matt Costello). Keep this in mind: in the past three years, MSU reached the Round of 32 (2013), the Sweet Sixteen (2014) and then Final Four (2015). The title game awaits.

Remember when everyone was wondering what was wrong with Kentucky? Nothing is the answer. It was young and lost a few games, but now has won seven of nine that included two wins over Florida and a victory at South Carolina. Jamal Murray and Tyler Ulis are as good of a backcourt as there is, but lately Skal Labissiere is making an impact. An eight-man rotation is working. Remember this about Murray and Ulis: together they shoot nearly 80 percent from the free throw line. Kentucky won’t give games away at the stripe.

Next week someone will ask can a #16 seed beat a #1? Three times it’s come very close to happening; in 1989, Oklahoma topped East Tennessee State 72-71 while that same season Georgetown beat Princeton 50-49. In 1996, Western Carolina came up just short to Purdue 73-71. Those are the first games everyone mentions, but here’s one that rarely comes up: in 1985, my #1 seeded Michigan team trailed by six at the half to 16th-seeded Fairleigh Dickinson. We ended up winning 59-55 in a game that wasn’t over until we made two free throws with :02 left. It came right down to the wire and if you don’t believe me, the whole game is on YouTube. I know it might make me sound old, but the internet is amazing. Two days later we ended up losing by the exact same 59-55 score to 8th-seeded Villanova. Two weeks later, Ed Pinckney and company won the national title.

Has anyone noticed the season Oregon is having? Its strength of schedule is fourth-best in the nation, it is 10-3 versus top-50 RPI and has 19 wins against top-100 teams. Dana Altman earned his third Pac-12 Coach of the Year honor this week. The Ducks don’t turn the ball over and they turn away shots at the rim (fourth in the nation in blocks). This is Altman’s 12th NCAA Tournament, so he has done this before. They could make a deep run.

Next time we talk the brackets will be out! I look forward to giving you my predictions. 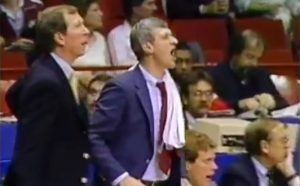 Assistant coach Steve Fisher (left) looks on as Michigan head coach Bill Frieder barks at an official after an offensive foul was called on the Wolverines early in the team’s game with Fairleigh Dickinson on March 15th, 1985.