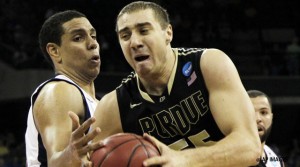 After trailing by as many as a dozen points in the second half, Jorden Page drilled a three-pointer to give the Gaels a 69-68 lead.  But Purdue recovered down the stretch and had just enough to advance to the 3rd round.

Terone Johnson paced the Boilermakers with 21 points, while Jones’ 23 for St. Mary’s led all scorers.  Purdue will meet the winner of (2) Kansas and (15) Detroit in the 3rd round.

Kevin Kugler and Tom Brennan called the action on the Westwood One Radio Network.

(Jackson’s layup puts Purdue up 13, as they continue to cruise)

(Purdue re-takes the lead at the line, as the Gaels look to respond)

(One last chance for St. Mary’s, who needs a three to tie)