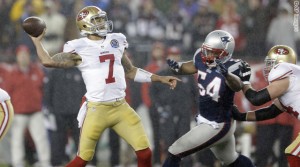 The 49ers led 31-3 in the third quarter before Tom Brady led the Patriots to 28 unanswered points to tie the game on Danny Woodhead’s 1-yard touchdown run.

But, on the ensuing kickoff, rookie LaMichael James returned the ball into Patriots territory and on the first play of the drive, Michael Crabtree’s catch and run of a Kaepernick pass put the Niners back in front for good. San Francisco is now just a win away from clinching the NFC West, while New England fell a game behind Denver in the race for a first-round bye in the AFC.

Dave Sims and James Lofton called the action on Westwood One Sports.