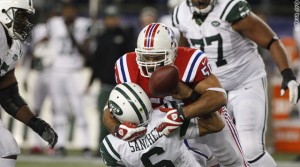 While Tom Brady and the Patriots offense will grab the headlines after wins like last week’s 41-28 victory over the Houston Texans, it’s the improved New England defense that will have a big say in whether the team reaches back-to-back Super Bowls.

While Brady and company try to score on the Baltimore defense, it’ll be up to the Patriots on the other side of the ball to slow down a Ravens’ offensive unit that put up 31 points on Denver’s highly ranked defense last week in a 38-35 victory.

Ahead of the game, our Mark Malone – who will man the sidelines for us at the AFC Championship Game on Sunday – had a chance to talk with Patriots defensive end Rob Ninkovich.

Coverage of the AFC Championship Game on Westwood One Sports will follow immediately after the NFC Championship Game concludes. Kevin Harlan, Dan Fouts and Mark Malone will have all the action from Foxboro beginning at approximately 6:15 PM Eastern.