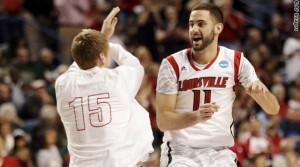 LEXINGTON, KY – Now that’s how a #1 seed shows it means business. Louisville took a big lead early on 16th-seeded North Carolina A&T and never looked back in a 79-48 second round victory on Thursday evening at Rupp Arena.

Russ Smith led all scorers with 23 points on 10 of 16 shooting from the field, while playing only 25 minutes of what became a blowout very early.

Kevin Kugler and Jamal Mashburn called the action on Westwood One Sports.

(Back-to-back baskets give the Cardinals a 33-14 advantage)

(Peyton Siva spins to the basket and scores)

(Stephan Van Treese dunks it home and Louisville is rolling)