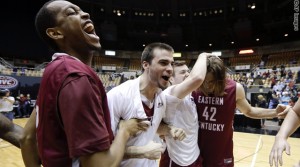 NASHVILLE, TN – Corey Walden had 29 points and Glenn Cosey added 23 as Eastern Kentucky earned its first NCAA Tournament berth since 2007 with a 79-73 victory over Belmont in the Ohio Valley Conference Championship Game.

The Colonels scored the first 12 points of the game and led most of the way, but the Bruins pulled into a tie early in the second half. But Eastern Kentucky answered with a run of its own to pull away and win its first conference title in seven seasons.

John Tautges and Will Perdue called the action on WestwoodOne Sports.

(Drew Windler hits and Belmont cuts the deficit to three)

(The final call as EKU wins the OVC)

(Postgame recap from John Tautges and Will Perdue)