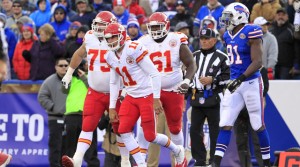 ORCHARD PARK, NY – Kansas City scored 14 unanswered points in the fourth quarter and the defense held on as the Chiefs defeated the Buffalo Bills 17-13 on Sunday afternoon.

On the day, Charles had 15 carries for 98 yards and that touchdown. He also added three receptions for 20 yards.

Tom McCarthy and Rod Woodson called the action on Westwood One.

(Jamaal Charles gets the Chiefs within three with a TD run)