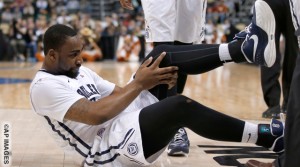 PITTSBURGH, PA – Things looked dire for Butler when their leader, Roosevelt Jones, left the game in the first half with a knee injury; but Jones was eventually able to return to action–gritting it out with a knee brace–and the Bulldogs were likewise able to grit out a defensive battle, securing a 56-48 victory over the Texas Longhorns in a Second Round match-up.

While scoring was hard to come by, Junior guard Kellen Dunham was able to lead the Bulldogs with 20 points.

Jonathan Holmes and Isaiah Taylor led the Longhorns in the losing effort with fifteen and fourteen points, respectively.

Scott Graham and Kevin Grevey called the action on Westwood One Sports.