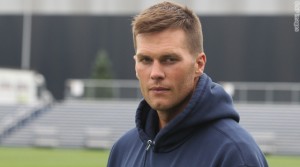 Other than a Week 17 loss in 2014, when New England rested many of its starters against Buffalo, the Patriots’ loss on Sunday night to Denver was the team’s first in exactly one day more than one year.

In his latest conversation with Westwood One’s Jim Gray, Tom Brady talks about moving on after the overtime defeat, dealing with the many injuries that have hit New England lately as well as his contention that receivers should get protection from low hits with a rules change.