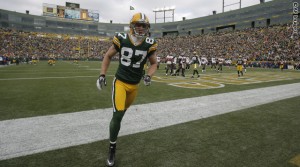 Raise your hand if you picked Jordy Nelson in the first two rounds of your fantasy football draft? No one? Well, if you knew then what you know now, you would’ve.

The 4th-year man out of Kansas State has been on the receiving end of 9 of Aaron Rodgers’ NFL-best 33 touchdown passes for the unbeaten Green Bay Packers, who take their 11-0 record to MetLife Stadium for a showdown with the New York Giants on Sunday afternoon.

Nelson spoke with NFL Insider hosts Mark Malone and Steve Tasker about his own great season and his team’s quest for perfection.

Coverage of the Packers-Giants game from MetLife Stadium begins Sunday at 3:45 PM Eastern on Westwood One Sports. Kevin Kugler and Mark Malone will bring you all of the action.