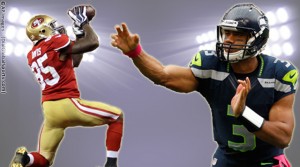 Both the 49ers and the Seahawks want to run the football and play great defense. After Alex Smith threw three interceptions last week against the Giants, you would think the 49ers are going to return to the run game on Thursday night. But just remember that last week the Patriots had over 300 yards passing and a 10-point lead heading into the 4th quarter against Seattle and decided to change strategies. They thought they would run the ball and use up the clock. The problem is that Russell Wilson caught fire, leading Seattle to a 4th-quarter comeback win. The 49ers need to continue to trust Alex Smith and put it in the air to beat Seattle.

From 2007-2009, Jim Harbaugh and the Stanford Cardinal held a 2-1 advantage over Pete Carroll and the USC Trojans. In 2011, the San Francisco 49ers swept the season series against the Seahawks. So with a 4-1 advantage over Carroll does Harbaugh have the edge? It’s hard to dispute the numbers. Also, under Coach Harbaugh the 49ers have not lost back-to-back games.

Rolling with the Rookie:

The Seahawks are 4-2, #4 in the NFL in total defense, and #29 in total offense. Running back Marshawn Lynch is 3rd in the league in rushing, the defense is allowing only 70 yards a game on the ground, but the success or failure of the Seahawks hinges on the play of Russell Wilson. In the Seahawks’ four wins, Wilson’s touchdown-to-interception ratio is 7 to 2. In their two losses, it’s 1 to 4. In those wins his QB rating ranges from 82-133 (good to very good). In the two losses, it’s 45.8 and 62.5 (really bad). We have to remember that he is a rookie, but it’s great for Seattle that they have a strong running game and a great defense to off-set the mistakes that will occur.

Should be a great game with first place in the AFC West up for grabs. Make sure you tune in to Kevin Kugler and me on Westwood One Sports.