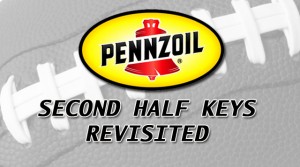 Oklahoma: Rod said Landry Jones’ play was the key for the Sooners.

Oklahoma Verdict: Jones connected with Damien Williams on a long pass that set the Sooners up for a touchdown on their first drive of the 3rd quarter, which made the score 31-13. When Seth Doege’s pass was picked off by Javon Harris and returned for a TD on the second play of the next Tech drive, the result was pretty much confirmed.

Texas Tech: Rod said the Tech defense needed to tighten up the second half.

Texas Tech Verdict: The Red Raiders were much better in the second half, giving up only 129 yards after surrendering 251 in first 30 minutes. But thanks to the aforementioned Javon Harris pick-6, it wasn’t enough to keep Tech in the game.

Nebraska Verdict: The Huskers added two second-half turnovers to the pair of giveaways they took into the halftime break. The back-breaker was a Taylor Martinez interception that came as Nebraska was driving deep into Buckeyes territory late in the third quarter and already trailing 49-31. A score there instead of a turnover could’ve changed the momentum.

Ohio State Verdict: Miller did more distributing than running the second half, as the Buckeyes built an insurmountable lead. Still, the threat of Miller’s legs opened huge lanes for Carlos Hyde and Rod Smith, who both scored on long TD runs as Ohio State blew out the Cornhuskers.