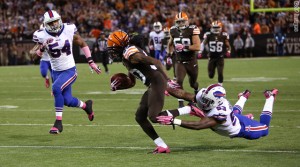 CLEVELAND, OH – In a game in which both starting quarterbacks left through injury, Brandon Weeden came off the bench to lead the Cleveland Browns to a 37-24 victory over the Buffalo Bills.

Starter Brian Hoyer left with an apparent knee injury early in the game, and Weeden entered the game. Overall, Weeden was 13 of 24 for 197 yards and a touchdown. The Browns also got an electrifying 79-yard punt return for a score from Travis Benjamin and a defensive touchdown to ice the game from T.J. Ward.

At 3-2, the Browns own sole possession of first place in the AFC North.