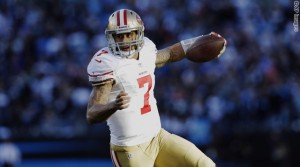 CHARLOTTE, NC – Colin Kaepernick ran for one score and threw for another as the San Francisco 49ers beat Carolina 23-10 to advance to the NFC Championship Game for the third straight season.

The 49ers will travel to NFC West rivals Seattle next Sunday with a trip to Super Bowl XLVIII on the line. The teams split their meetings during the regular season.