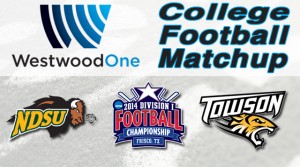 To get you ready for the game, our analyst Rocky Boiman, who will call the game, filed this scouting report on the Bison and the Tigers.

How they got here: The Bison are the pinnacle of FCS football, riding a 23-game winning streak and trying to capture their third straight national title. This season they showed just how good they are by beating Kansas State 24-21 in Manhattan, which may not even be considered an upset with how good they have been over the last three seasons. Outside of a 24-23 win over Northern Iowa, North Dakota State has been utterly dismantling teams. The bad news for Towson is they have only gotten better in the playoffs, beating Furman, Coastal Carolina and New Hampshire by an average of 30+ points. It’s been said before, but they are the Alabama of the FCS: dominant front seven on both sides of the ball, powerful, smashmouth run game, and a great defense that is leading the nation in defense by giving up just 11.6 points per game. You need a thesaurus to find new synonyms for just how good this team is at this level.

Player I’ll be watching: Bison quarterback Brock Jensen. Jensen is the epitome of a winner with a 47-5 career record. It may be considered a slap in the face to call him a game manager, but he just doesn’t make mistakes and his command of the offense seems to always get NDSU in the right play call. Interestingly to me though, as I watched the semifinal versus New Hampshire, he threw a pick-six on the game’s third play and at times in that particular game, the unflappable Jensen looked rattled and he was uncharacteristically inaccurate at times. He cannot afford to have an off game and make critical mistakes versus a very good Towson defense.

The Bison three-peat if…: They can shut down Towson running back Terrance West. West has had a season for the ages this year, racking up an unreal 2,416 yards on 391 carries, including a record-setting performance against Eastern Illinois (which I had picked to win the FCS) in which he ran the ball for 354 yards. West will be the best player on the field Saturday afternoon and if he gets loose, he can pound the Bison right out of another title.

How they got here: The Tigers also got the season started off on a good note by beating FBS team UConn 33-18. In the playoffs, after a first-round bye, they got their first playoff win in 29 years by beating Fordham. But the win that really showed that they are a legitimate team was the quarterfinal victory over Walter Payton Award-winning quarterback Jimmy Garoppolo and Eastern Illinois. EIU boasted the most explosive offense in the country but Towson, with running back Terrance West, showed that you can still win the old-fashioned way by pounding the run. In the semifinal game versus Eastern Washington, Towson jumped out to a 21-0 lead before falling behind in the fourth quarter, needing a touchdown with just 17 seconds to play to get into the championship game. You can’t help but fall in love with this team and their old-school, gritty determination to win.

Player I’ll be watching: Tiger quarterback Peter Athens. Athens is a very good and very accurate pocket-passing quarterback. This team lives and dies by the run, but when teams stack the box to stop Terrance West, Athens really delivers and makes this offense play to its potential. However, Athens went down with a throwing shoulder injury towards the end of the first half of the semifinal game and did not return. Towson has a capable backup in Connor Fraizer, but he is not nearly as good of a passer as Athens. Towson really became one-dimensional in the second half of the semifinal and Terrance West was held largely in check when, without the threat of the pass, the defense stacked the box. With two weeks of rest before the finals, all indications are that Athens will start. But remember, it was his throwing shoulder that was injured and no word on the extent of the injury. Will he be a shell of his former self and allow NDSU to focus on stopping the run? This will be a major development of the game.

The Tigers spring the upset if: They can get a big game out of guys OTHER than Terrance West. No question West will have to be huge, but it can’t be just him if they hope to dethrone the king.  Towson has a great freshman running back in Darrius Victor (who is more of a quicker, scat back) that gives them a one-two punch out of the backfield. Throw in a very talented, big-play TE in James Oboh and WR James Dowling, and the Tigers have some other weapons on offense. To win this game, one if not all three of these guys and more, will have to have the game of their lives.

Jason Horowitz, Rocky Boiman and Ted Emrich will have all the action as North Dakota State takes on Towson. Coverage begins at 1:30 PM Eastern and you can listen to the broadcast right here on WestwoodOneSports.com.