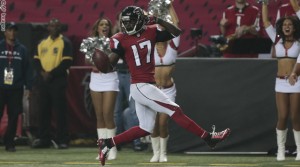 ATLANTA – It was a record-breaking night as the Atlanta Falcons defeated the Tampa Bay Buccaneers 56-14.

In the lopsided win, Atlanta’s Devin Hester had a punt return TD – his 20th return TD of his career, which separated him from Deion Sanders and set an NFL record.

The 42-point margin of victory is also the largest in the history of the Falcons franchise. Atlanta led 56-0 after three quarters before allowing a pair of late Tampa Bay scores.

Matt Ryan was 21 of 24 on the night – setting a new team record for completion percentage in a single game – and had three touchdown passes.

Ian Eagle and Mike Mayock called the action on Westwood One.