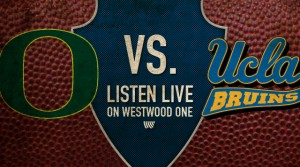 What a difference a week makes:

After the September 28th rankings were released, the Pac-12 was well represented with both Oregon (#2) and UCLA (#8) ranked in the top 10 of the AP poll. But the Ducks hosted an undefeated, yet un-ranked Arizona team a week ago Thursday night and were beaten for the second year in a row by the Wildcats, this time in Autzen Stadium. Two days later, UCLA hosted Utah and got punched in the mouth early. Finding themselves down 14 points, the Bruins were forced to play catch-up and ended up with a two-point loss of their own. Now both teams are literally fighting for their College Football Playoff lives early in the month of October. I’d be hard pressed to see a two-loss team from ANY major conference get into the inaugural final four of college football, and if one does, it’s probably not coming from out west.

In this game, we’ll see a great matchup of two Heisman candidates and potential first-round NFL draft picks in Marcus Mariota and Brett Hundley. Hundley comes into this game as the nation’s most accurate passer, completing just less than 73% of his passes, while Mariota still hasn’t thrown an interception in 2014 and has a career touchdown-to-interception ratio of 78:10… just astounding!

What the Ducks need to do to bounce back with a win:

Win the running game battle, and that has two different sides to it. The Ducks have battled a host of injuries on the offensive line, which has taken its toll on Oregon’s explosive running game. The Ducks were held to just 144 rushing yards on 41 carries, an average of just 3.5 yards per carry. That’s NOT Oregon football. On the defensive side, I’ve been underwhelmed by the play of Oregon’s front seven. They gave up nearly 210 rushing yards and three TDs on the ground to Arizona last week, losing that running game battle. If I was running Oregon’s defense, my focus would be loading up the box to shore up the run and play a heavy dose of man coverage because the Ducks back end is REALLY strong in my opinion with guys like Ifo Ekpre-Olomu, Reggie Daniels and Erick Dargan.

What the Bruins need to do to bounce back:

Keep their QB clean. Ironically, both of these teams are two of the most sacked teams in America. Oregon is #110 in FBS and is being sacked an average of three times per game, while UCLA is 123rd (out of 125 teams!) after being sacked TEN TIMES versus Utah last weekend. Hundley ended up with -24 yards rushing due to the sacks, taking away his ability as a dual-threat signal caller. When Hundley has time, I like his patience in the pocket, he’s got a strong arm and is not afraid to take chances downfield. But if the Bruins’ offensive line doesn’t rise up to the challenge, is could be a long afternoon in Pasadena for UCLA.

For the second straight week, the teams in the state of Mississippi will command the attention outside of this game. Colossal matchup in Starkville, between second-ranked Auburn and Dak Prescott’s #3 Bulldogs. Meanwhile, Ole Miss looks to remain undefeated, but travels to one of the more difficult venues to win as a visiting team taking on Texas A&M in College Station. Will the shakeup in college football continue? Or are the Rebels and Bulldogs for real in 2014? Another great weekend of college football!

Mark Johnson and Derek Rackley will have the call from the Rose Bowl beginning at 3:00 PM ET. You can listen right here on WestwoodOneSports.com!