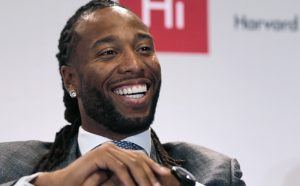 Larry Fitzgerald continues to climb the list for most yards receiving in NFL history. On Sunday, he moved up to third with only Jerry Rice and Terrell Owens ahead of the Cardinals legend.

In his weekly conversation with Westwood One’s Jim Gray, Larry talks about moving up, whether he has made a decision on his return for next year and much more.