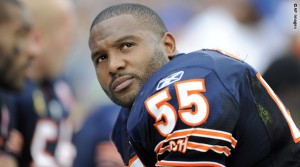 The defending NFC North champion Chicago Bears are 2-3, and already find themselves three games behind in the division thanks to the unbeaten starts of both Green Bay and Detroit.

Next up for Chicago is a Sunday Night Football meeting with the Minnesota Vikings, and linebacker Lance Briggs spoke with Westwood One’s Scott Graham about slowing down Adrian Peterson, getting the season back on track and his life-long love affair with comic books.

Dave Sims, James Lofton and Hub Arkush will have all the action of Sunday Night Football from Soldier Field as the Bears host the Vikings. Coverage begins at 7:30 PM Eastern on Westwood One.