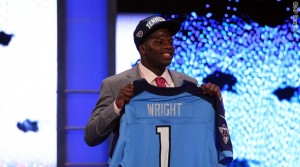 NEW YORK, NY – Robert Griffin III won the Heisman and was selected 2nd in the NFL Draft, but his Baylor teammate Kendall Wright’s no slouch. The wide receiver, who was on the receiving end of many of Griffin’s big throws last season, was picked 20th in Thursday’s draft by the Tennessee Titans.

Soon after he was selected, Kendall spoke with our Scott Graham.