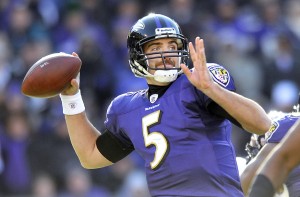 All eyes in the NFL world Sunday night will be firmly fixed on Baltimore, where the Ravens will host New England in a rematch of last year’s AFC Championship Game.

Ravens fans need no reminder of how that one ended. And while Sunday night’s game will be billed as a chance for revenge or redemption, the reality is it’s much more important as a way for one of the top teams in the AFC to get a leg up on another early in the season.

Ahead of the game, Baltimore quarterback Joe Flacco spoke with our Scott Graham.

Kevin Kugler, James Lofton and sideline reporter Hub Arkush will have all the action from M&T Bank Stadium on Sunday night as the Ravens and Patriots do battle. Coverage begins with Scott Graham and NFL Sunday at 7:30 PM Eastern on Westwood One Sports.