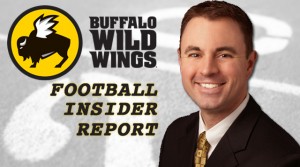 Happy Holidays! If you’re anything like me, shopping for presents is now one of your big focuses. After all, there’s really no reason to start until the final weekend. Just plan wisely. Go out of your way to get to stores early, know what you want when you go in so you can get there and leave quickly, and most importantly, if you are out Sunday, make sure you plan to shop near Buffalo Wild Wings! That way, you can plan an extended “break” to watch the games and eat some great BWW food! There’s plenty to see this weekend, too, so plan accordingly!

First off, let’s talk postseason, because we’re almost there, and the AFC COULD be locked up this weekend. Already, New England, Denver, Houston and Baltimore are in the playoffs, all teams led by veteran quarterbacks. However, the rest of the field could be made up of some of the young guns in the league right now. With a win over Pittsburgh, Andy Dalton and Cincinnati not only eliminate the Steelers, but the Bengals clinch a playoff berth. And the turnaround in Indianapolis could be completed this weekend, because if Andrew Luck and the Colts can venture into Kansas City and come out with a win, they’ll lock up a spot in the field. With Cincinnati and Indianapolis wins, the field could be complete. And if Houston knocks off the Vikings this weekend, the road to the Super Bowl in the AFC will go through Houston, because they will clinch home-field advantage throughout the playoffs.

Now, the NFC… that’s where the drama will likely carry into week 17. First, we know that Atlanta, San Francisco and Green Bay are locked into postseason berths. But that still leaves three spots to be claimed. Sunday night has big ramifications in the NFC, when San Francisco travels to Seattle. The Niners are already in the playoffs, but if they beat Seattle, they can lock up the NFC West. In addition, if they win and the Packers lose to the Titans, they clinch a first round bye. But also in that game, if Seattle wins, they are in the playoffs with rookie quarterback Russell Wilson leading the way. There are several scenarios in which they can still get in with a tie or a combination of other losses, but the easiest way to put it for Seattle is win…and they’re in.

In the NFC East, both the Redskins and Giants COULD clinch spots this weekend, but you’ll need a map to decipher the road to the postseason for these two teams. For Washington, they clinch if they beat Philadelphia, plus the Giants, Bears and Vikings all lose. It’s even more convoluted for the Giants. First, they must beat Baltimore, and the Ravens are trying to wrap up their division on Sunday, so that won’t be easy. But, if they do that, they need the Bears to lose, the Vikings to lose, either the Cowboys or Redskins to lose, and then the team between Dallas and Washington that DOESN’T lose… the Giants need them to tie. Let’s just say that it’s probably not going to happen for the Giants this weekend and leave it at that.

Best games this weekend? I think you have to start at the end. San Francisco matching up with Seattle in the Pacific Northwest is an awfully intriguing game. First, you have the coaches. There’s no love lost between Pete Carroll and Jim Harbaugh. It started in 2009, when Carroll was still at USC and Harbaugh at Stanford. Harbaugh’s Cardinal team was up big, and Coach Harbaugh went for two. In the postgame, Carroll was heard asking, “What’s your deal?” and there’s been some mutual dislike since. Setting the coaches aside, though, this game is loaded with intrigue. First, Seattle at home has been terrific. In fact, they haven’t lost at home this year, and you can imagine the Seahawks crowd (the 12th man) will be as loud and impressive as ever with the 49ers in town and a playoff spot on the line. The 49ers, though, have proven that the road is not daunting to them, as they showed last weekend in New England. The earlier meeting in San Francisco was a Thursday night affair, and one that was a low scoring defensive struggle, with San Francisco winning 13-6.

This game doesn’t appear to be a game suited for that kind of low-scoring defensive struggle. Seattle put 50 points on the board against the Bills last weekend, while the 49ers scored 41 against New England. The Seahawks set a team record just the week before scoring 58 against Arizona, and their 108-point performance is tied for the third best scoring output in NFL history over a two-game stretch. The key has been the play of rookie Russell Wilson. Since his struggles against the 49ers in October, he’s thrown 13 TD passes, while only being intercepted twice. He also has a 111.3 QB rating in those games. But the Niners boast one of the league’s best defenses, and were the last team to really shut down the Seahawks. Dave Sims and James Lofton have a great game to call Sunday night on Westwood One Sports.

While that’s the highlight of the weekend for me, I am intrigued by the Texans and Vikings matchup as well on Sunday. The pursuit of history is happening in Houston, as Adrian Peterson goes for Eric Dickerson’s single season rushing record in the final two weeks. Peterson needs 147 yards in each of the Vikings last two games to break the record, but he’ll have his hands full this week. The Texans boast the league’s fifth-best rushing defense, allowing only 93 yards per game on the ground and a league-best three rushing touchdowns. Only Chris Johnson and Vick Ballard have topped 100 yards against the Texans defense this season. But for Minnesota and Houston, playoff talk has been the dominant conversation in practices this week. Minnesota has put itself in position for a Wild Card spot in the NFC, and with a divisional matchup against Green Bay in Week 17, the Vikings want to keep pacing towards the playoffs. And for the Texans, as mentioned earlier, they can wrap up home-field throughout the playoffs with a win against Minnesota.

Both teams can run the football. Both teams boast great pass rushers in J.J. Watt of Houston and Jared Allen of Minnesota. Both have plenty at stake. Sounds like a recipe for a great Sunday afternoon clash in Houston. Be sure you are in prime position for all the games this weekend at Buffalo Wild Wings.  Happy Holidays, and enjoy the games!

Westwood One NFL play-by-play announcer Kevin Kugler tackles subjects that are interesting to him each week in his blog. The Football Insider Report is brought to you by Buffalo Wild Wings. Protect the Football. This weekend, Kevin is in Detroit for a special Saturday night affair as the Detroit Lions host the Atlanta Falcons. Kevin, Trent Green and Hub Arkush will have all the action from Ford Field as the Falcons try to wrap up a first-round bye in the NFC. Coverage begins at 8 PM Eastern with Jim Gray, Tom Brady and Larry Fitzgerald on the pregame show.