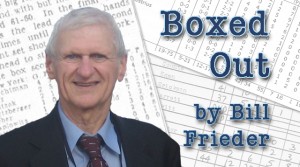 So there’s a 15 in the 16 (the Sweet 16, that is) as Florida Gulf Coast pulled off the biggest surprise in dominating both Georgetown and San Diego St. to advance. It was the seventh time a 15 beat a 2, but the first time that a #15 seed followed with another victory to advance to the second weekend. Gulf Coast was paced by Sherwood Brown’s 41 points on 12 of 21 shooting over the two games and Brett Comer, who racked up 24 assists. The Eagles are an athletic team capable of beating anyone, so be ready Florida.

Another surprise was Oregon beating both a 4 and 5 seed in San Jose – first Oklahoma State, then St. Louis. Oregon can play and should have been seeded in the 8-9 range, but the committee didn’t give enough credit to their Pac-12 tournament win or the fact that they had injured starters out for nine games. The Ducks will give Louisville a game.

13th-seeded La Salle will have a tough time out West, but deserve tons of credit as they had to win three games to get to Los Angeles.

Heard a great story about Explorers head coach Dr. John Giannini. La Salle wouldn’t have made it out of the second round against Kansas St. if big man Jerrell Wright hadn’t made seven of eight from the foul line down the stretch in a 63-61 win. Wright was a 62.6% free throw shooter during the season! How’d it happen? Giannini said he had this tip for his 6’8″ forward as he struggled from the line this year: clear your mind and think of only one word while at the line. And repeat it over and over: “In, in, in, in, in…” Are you surprised that the “Dr.” in Giannini’s title comes thanks to his doctorate in sports psychology?

Taking on all Comers:

Let’s jump back to FGCU for a second. It is this time of the year that a player becomes a national sensation and we all wonder how every coach in American could miss him. Brett Comer is this year’s version. An important thing to remember is that some kids want to play right away, and that might mean staying close to home at a mid-major. Just because he did this over two games doesn’t mean he could do it night-in and night-out in the SEC or the Big East. But man is he good! With 24 assists in those two games, his confidence is off the charts. This is not the guy who had six turnovers in 28 minutes in a February 16 loss to Lipscomb.

Bottom line is this. As we said all year, there’s great parity, but we still have the 6 to 10 elite teams at the top as indicated by the top four seeds making it to Washington, D.C. The 1-2-3 seeds are still alive in the Midwest. And 1-3-4 made it to North Texas. Add in 2nd-seeded Ohio State out West and you have 11 of the top 16 teams in America still alive.

The Big Ten proved what we’ve been saying all along: it’s the best conference in basketball this season. With four teams still alive and split with one in each of the four regions, there’s a chance of an all-Big Ten Final Four in the heart of SEC country. That said, the B1G has won only one national championship in 23 years, so maybe it’s about time.

Biggest disappointments? For the fourth straight year, Georgetown bowed out against a double-digit seed. UNLV has also lost to lower seeds in each of the last four years and hasn’t won a tournament game since 2008.

I can tell you that Ben Howland did a great job in getting UCLA to three Final Fours and recruiting NBA talent to Westwood. He won Pac-12 titles. But at the end of the day, you can never win enough. He gave UCLA a good decade, which is pretty much all one can ask for at a school like that unless you are winning a title every five years. Ditto for Tubby Smith. Minnesota had not won an NCAA Tournament game since 1997 when he got there, and when he did beat UCLA this year, all it did was get him fired.

On that note, La Salle’s John Giannini was 88-115 in his first seven seasons at La Salle. Give their administration credit for having confidence in their guy and sticking to him. When they are enjoying the Southern California weather this weekend, you can be sure they’ll be glad they did.

Former Michigan and Arizona State head coach Bill Frieder is an analyst for Westwood One’s coverage of NCAA Basketball. In his weekly blog Boxed Out, Bill scours the box scores to bring you interesting stories from the world of college basketball. This weekend, Bill will be alongside Wayne Larrivee for the West Regional semifinals and final at the Staples Center in L.A. You can listen live right here on WestwoodOneSports.com.

29 March 2020 No Comments
Westwood One presents Great Games in NCAA Tournament History. Today we venture back to March 29th, 1982 as North Carolina and Georgetown squared off in the championship game. The legend of Michael Jordan was born as the…Read More »

29 March 2020 No Comments
Westwood One presents Great Games in NCAA Tournament History. Today we travel back 17 years to the Midwest Regional Final as Dwyane Wade and Marquette defeated Kentucky. Wade had a triple-double with 29 points, 11 rebounds and 11 assist in a performance that ranks among the best in NCAA Tournament…Read More »

28 March 2020 No Comments
Westwood One presents Great Games in NCAA Tournament History. Today, we travel back a decade as the Cinderella run of Butler all the way to the Championship Game in their home city of Indianapolis ended with a matchup with Duke. The Bulldogs hung tough all game, but fell to the…Read More »

28 March 2020 No Comments
Westwood One presents Great Games in NCAA Tournament History. Today, the destination is the Washington, D.C. Regional Final between George Mason and UConn as the Patriots completed their improbable run to the Final Four. Dave Sims and Dave Gavitt had the call back in 2006.Read More » 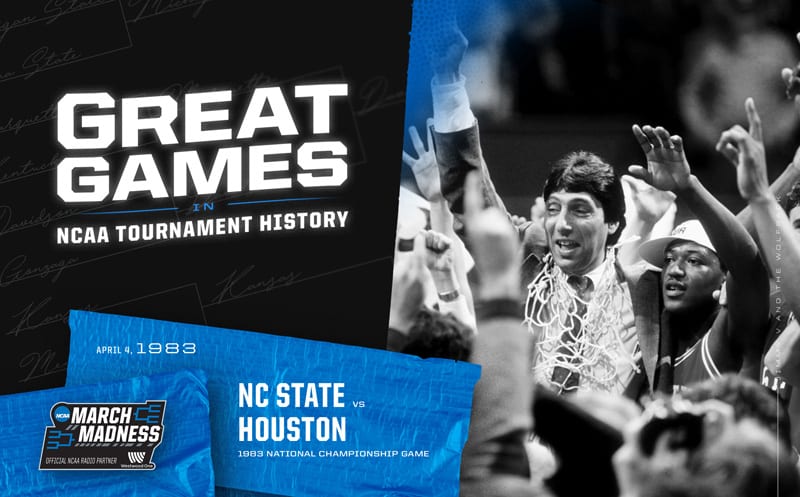 28 March 2020 No Comments
Westwood One presents Great Games in NCAA Tournament History. Today, we travel back to 1983 as Jim Valvano’s underdog NC State squad upset Houston on a Lorenzo Charles basket at the buzzer. Cawood Ledford and Curt Gowdy had the call in 1983.Read More » 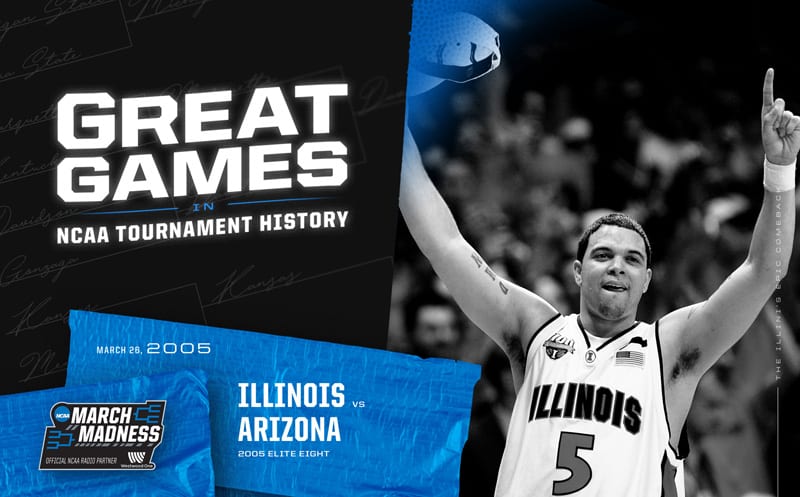 28 March 2020 No Comments
Westwood One presents Great Games in NCAA Tournament History. Today, we listen back as top-seeded Illinois claws its way back from a 15-point deficit in the final four minutes of an Elite 8 matchup with Arizona in front of a raucous crowd in Chicago. Kevin Harlan and John Thompson had…Read More » 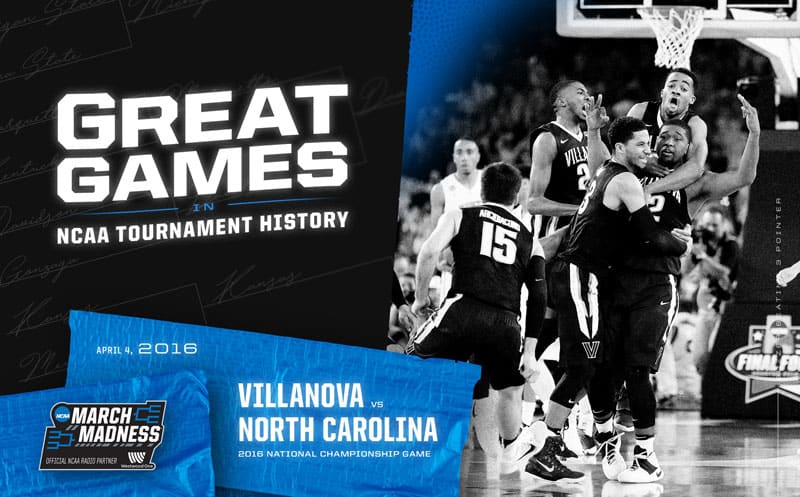 23 March 2020 No Comments
Westwood One presents Great Games in NCAA Tournament History. Today, we play back Villanova’s victory over North Carolina in the 2016 title game as Kris Jenkins’ unforgettable shot at the buzzer gave the Wildcats their second-ever national championship. Kevin Kugler, Clark Kellogg and John Thompson had the call in 2016.Read More » 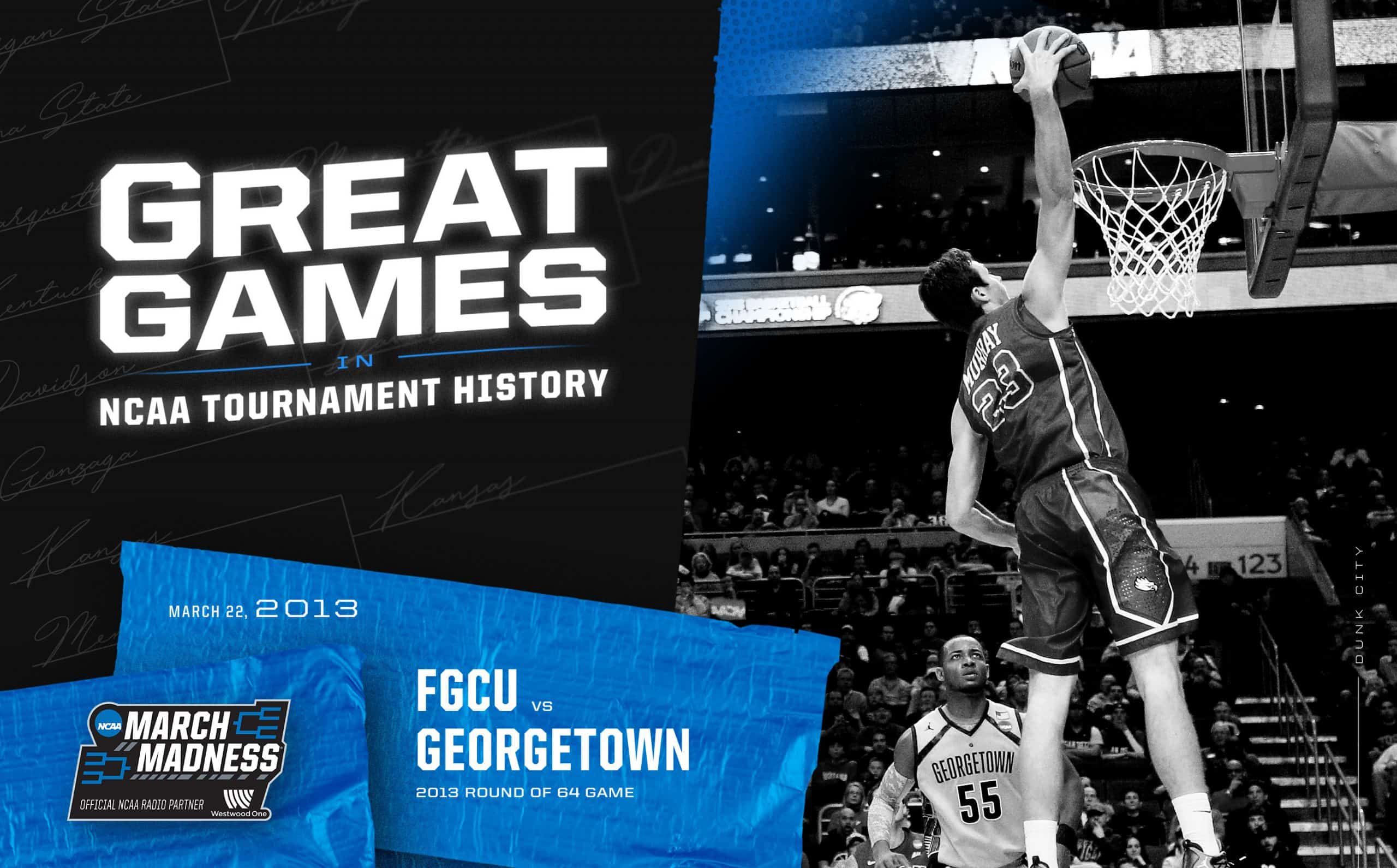 22 March 2020 No Comments
Westwood One presents Great Games in NCAA Tournament History. Today, we play back FGCU’s coming out party, as the relative unknowns announced themselves to casual fans with a huge upset of Georgetown in the Round of 64 back in 2013. The Eagles would then beat San Diego State to become…Read More »
Load more posts