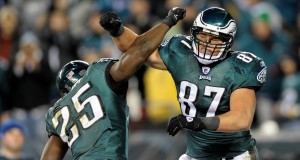 Raise your hand if you had Nick Foles starting on your fantasy football team last week. Now that your hand is up, pat yourself on the back.

While no one doubts that the former Arizona Wildcat could go on to a successful NFL quarterbacking career, few would’ve guessed that he’d tie the league record for touchdown passes in a single game in only his ninth start. But that’s just what Foles did with an epic Week 9 performance against the Oakland Raiders. Foles threw for seven touchdown passes in all and recorded a perfect passer rating.

One of the recipients of a Foles TD pass last Sunday was veteran tight end Brent Celek, who spoke with our Scott Graham ahead of Sunday’s game between the Eagles and the Green Bay Packers.

Tom McCarthy and Mark Malone will have the action from Lambeau Field as the Eagles visit the Packers. Coverage begins at 12:30 PM Eastern.

25 February 2020 No Comments
The football world has descended upon Indianapolis for the Combine – and so has our pod crew. Ian catches up with Falcons GM Thomas Dimitroff (11:30) and Titans linebacker Rashaan Evans (33:00). Meanwhile, Tom Pelissero and Mike…Read More »

18 February 2020 No Comments
Ahead of the combine next week, Ian’s got prospects galore! Oklahoma quarterback Jalen Hurts (11:55), Utah State signal caller Jordan Love (29:45) and South Carolina defensive tackle Javon Kinlaw (45:00) are all on the show this week. Plus, Tom Pelissero and Mike Garafolo on the quarterback carousel, progress on a…Read More »