9:39 PM ET: Less than nine minutes remain in Super Bowl XLVIII and all that’s left now is to wind down the clock. Time to head to the sidelines to snap some postgame photos. Back later with a recap, complete highlights, postgame reaction from both teams and a photo gallery.

9:23 PM ET: If it wasn’t over before, it is now. Wilson finds Doug Baldwin short of the end zone and he makes several Broncos miss as he ducks into the end zone for another Seahawks touchdown. Seattle 43-8.

9:12 PM ET: And there’s the answer to that question. On the final play of the third quarter, Manning connects with Demaryius Thomas for a short TD. After the two-point conversion, Denver cuts the deficit to 36-8.

9:05 PM ET: Unless something really, really, really epic happens, the only question now is not who is lifting the Lombardi — but whether or not Seattle’s defense can record the first shutout in 48 years of Super Bowl history.

9:03 PM ET: Jermaine Kearse has just about wrapped up Seattle’s first NFL championship. Russell Wilson hits the receiver on a slant and Kearse absorbs a hit, spins off a tackle and takes it into the end zone. 36-0 Seattle.

8:57 PM ET: Peyton Manning completes a big pass over the middle to Demaryius Thomas and the Broncos are on the move… until the ball is punched out and Seattle recovers the fumble. Everything that could go wrong for Denver is going wrong tonight.

8:47 PM ET: Here’s the call of Harvin’s return, as heard on WestwoodOne.

8:33 PM ET: HOLY SMOKES. For the second year running, the opening kickoff of the second half goes back for a touchdown. This time it’s Percy Harvin and the Seahawks lead 29-0.

8:31 PM ET: Here’s Kevin Harlan’s call of Malcolm Smith’s interception and return for a touchdown as we get the second half going.

8:01 PM ET: Denver tries on fourth-and-one from inside the Seattle 20 but the pass falls incomplete. The Seahawks run out the first half and they head to the locker room leading 22-0. Denver is the first team shut out in the first half of the Super Bowl since the New York Giants against the Baltimore Ravens in Super Bowl XXXV.

7:49 PM ET: A Kam Chancellor INT set the Seahawks up with a short field and Marshawn Lynch scored for a yard out to make it 15-0. On the next possession, Malcolm Smith intercepted Manning again and took it to the house. Seattle is up 22-0 at the two-minute warning of the first half.

7:00 PM ET: Wilson to Baldwin puts the Seahawks in the red zone.

6:32 PM ET: Seahawks kickoff…and a high snap from the Broncos on the first play from scrimmage leads to a safety for Seattle. The fastest score in Super Bowl history.

6:29 PM ET: Super Bowl XLVIII about to kickoff. Seattle won the toss and deferred. Peyton and the Broncos will receive.

5:30 PM ET: A lot of celebrities here in New Jersey hoping for a great game. 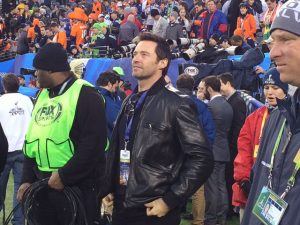 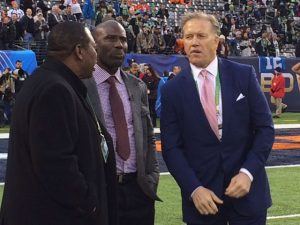 4:00 PM ET: We are on the air!! Kevin and Boomer setting the scene at MetLife. 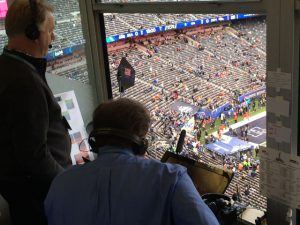 Kevin and Boomer opening up our broadcast

3:30 PM ET: Here’s where the players are right now…they’re getting ready to come out…3 hours till kickoff. 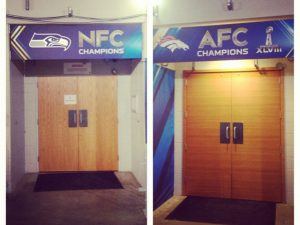 3:15 PM ET: There’s a storm coming…literally. Some bad weather due in late tonight. But it should hold off for the game. Could make for an interesting ride home though.

2:50 PM ET: Went down to the field to snap a few pics. It’s starting to rain here a little. Got to keep the field dry! 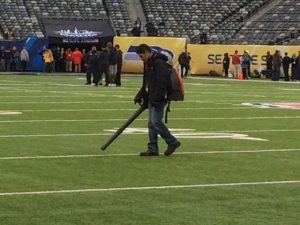 2:00 PM ET: Welcome to the Super Bowl XLVIII live blog. Throughout the day, we’ll be bringing you pictures from around the big game – including behind-the-scenes shots of our broadcast – some commentary from what our announcers are talking about on the air and YOUR comments on our Twitter feed (@westwood1sports). And a reminder, you can listen to our broadcast on NFL Audio Pass on NFL.com, NFL Mobile on Verizon, SiriusXM Satellite Radio (Sirius 88 / XM 88) or on a WestwoodOne affiliate radio station near you. 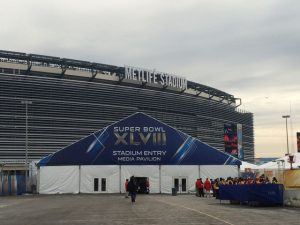